Hemp Decarboxylation; What It is and Why It’s Important

Hemp decarboxylation is an important consideration when determining the concentration of THC in hemp. Let’s explain.

Hemp contains numerous raw cannabinoids, which are variations of the most common cannabinoids that we typically hear about. Raw hemp does not cause any kind of psychoactive experience, though. For instance, if you add raw hemp leaves to your salad, you wouldn’t feel any psychoactive effects. Why? Because those cannabinoids have not been “decarbed” prior to consumption

The process of decarboxylation usually involves exposing the cannabinoids to heat or light, which inherently changes the chemical structure of them. This unlocks the once sleeping psychoactive potential of THC and makes it an active side effect.

For instance, the metabolic precursor to THC (the cannabinoid famous for getting people “high”) is THCa. However, THCa in and of itself doesn’t have any psychoactive abilities. Once exposed to heat, though, the chemical composition changes allowing it to directly affect a person’s endocannabinoid system and incur psychoactive effects. 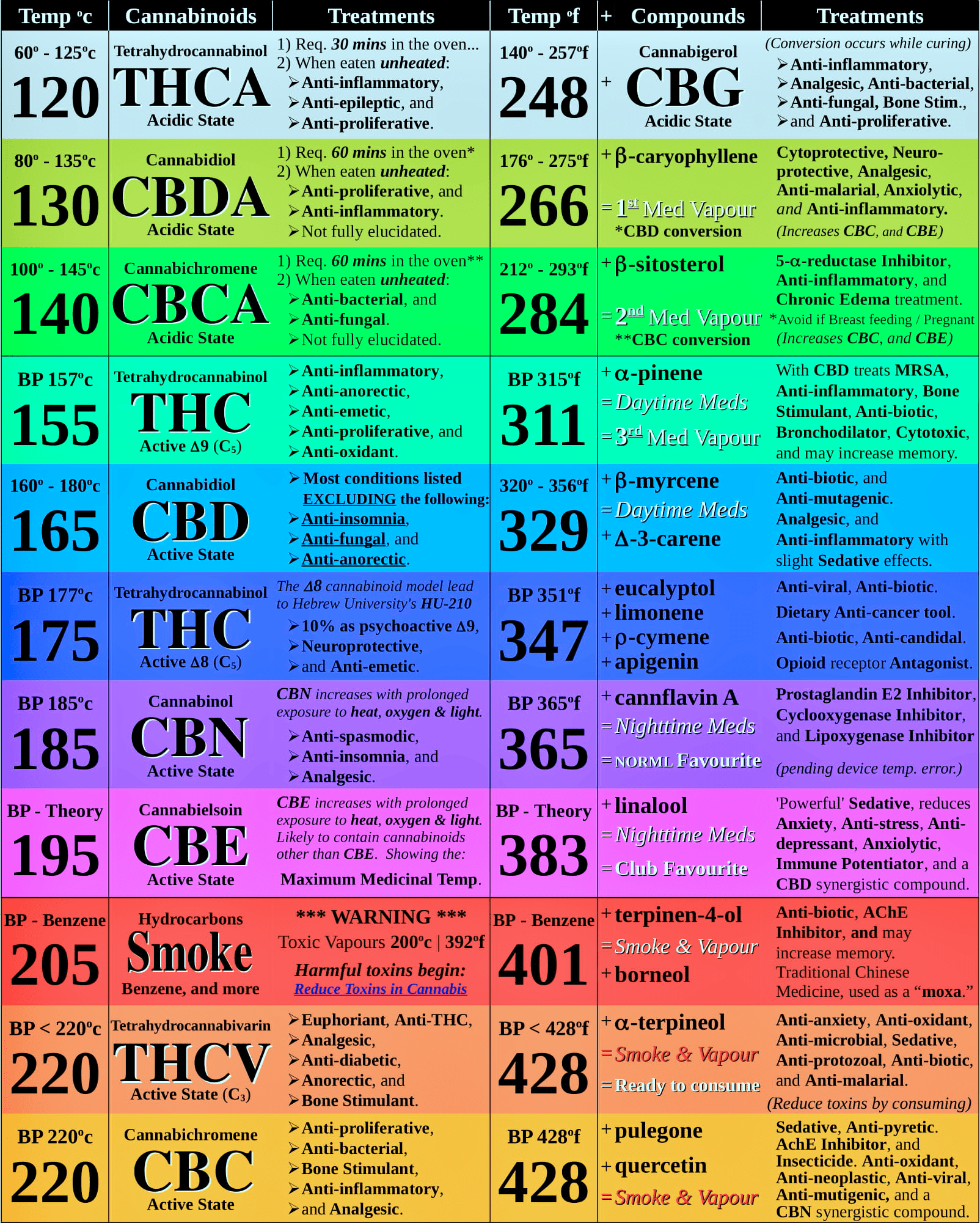 To accurately determine the amount of THC in hemp (and to confirm that it is legally compliant), the plant must be tested to measure the cannabinoid level. Because hemp tests occur during growth, they must be tested before hemp is decarboxylated. To determine THC levels pre-decarboxylation (a.k.a. “total potential THC”), use the following formula.

THCa is the cannabinoid precursor to THC. It can not convert into THC unless it is dried and heated up (i.e. decarboxylated). Until it goes through the decarboxylation process, though, THCa is non-psychoactive. Regardless, THCa possesses some pretty impressive therapeutic potential including:

Similar to the THCa/THC relationship, CBDa is the forerunner to CBD. CBDa also has to go through the decarboxylation process before it turns into CBD.

Preliminary research shows that some of the potential health benefits associated with CBDa include:

CBGa performs a protective function for cannabis. It is produced in the plant’s trichomes and it triggers targeted plant cell necrosis for natural leaf pruning. This allows the plant to maximize energy directed toward the flower.

CBGa may also convert to CBG, but in a majority of strains, CBGa eventually converts into either THC or CBD.

Research has shown that some of its health benefits could positively affect people dealing with cardiovascular disease, metabolic disorders, colon cancer, and more.

Why Hemp Decarboxylation is Important

According to Synergistic Energy Associates, the two key elements to decarboxylation are heat and light. “Cannabinoids are converted into their neutral forms upon heating or exposure to light. Depending upon the end product, processors may choose to decarboxylate cannabis plant material before or after the extraction.”

The chemical composition of raw cannabinoids has an extra carboxyl ring or group attached to their chain. Decarboxylation removes a carboxyl group and releases carbon dioxide, allowing the cannabinoid to become “activated” and ready to deliver the desired medicinal properties of cannabis to the final product.

Hemp decarboxylation also improves cannabinoid extraction. Research shows that moisture content in the plant can have negative impacts on extraction yields. Water makes the extraction process slower and less efficient because it interacts with the solvent and affects the flow during extraction.

If you heat the material prior to extraction, the water is removed from the plant and increases extraction efficiency.

In addition to this, neutral THC and CBD are more soluble than their more acidic counterparts, THCA and CBDA. This makes the extraction with non-polar solvents more effective at capturing cannabinoids and having higher extraction yields.

The two most commonly known decarboxylated cannabinoids are THC and CBD.

THC, while most widely known for its psychoactive effects, offers many potential therapeutic benefits including relief from pain, anxiety, nausea, insomnia, and a lack of appetite. Likewise, CBD may help treat many conditions like seizures, inflammatory bowel disease, depression, inflammation, migraines, anxiety, and more.

Decarboxylation is the process of heating cannabinoids to activate their different potential health benefits. It also makes for easier and more effective extraction. But perhaps most importantly, hemp decarboxylation reveals the actual THC levels in hemp rather than “total potential THC”, which is important considering the unpredictability of THCa (i.e. whether or not it will actually convert to THC).

Contact us to learn more about the importance of hemp decarboxylation and the hemp cultivation process.

END_OF_DOCUMENT_TOKEN_TO_BE_REPLACED

Cannabinoid Synthesis and the Biosynthetic Pathway

Cannabinoid synthesis has caused a heated debate among researchers. So, what's cannabinoid biosynthesis? Could it be the key to unlock the mass production of cannabinoids? The most valuable compone...

END_OF_DOCUMENT_TOKEN_TO_BE_REPLACED

The Difference Between Hemp and Marijuana

END_OF_DOCUMENT_TOKEN_TO_BE_REPLACED

Hemp extraction methods – Hemp extracts have become so popular in recent years that consumers can find them almost anywhere – grocery stores, coffee shops, and even gasoline stations. These products h...

END_OF_DOCUMENT_TOKEN_TO_BE_REPLACED

Hemp industry outlook has been a point of speculation for a long time. After decades of efforts, legal industrial hemp is here. To be clear, hemp is cannabis with not more than 0.3 percent THC concent...

END_OF_DOCUMENT_TOKEN_TO_BE_REPLACED

Hemp’s Effect on the Local Economy

Hemp’s effect on the local economies has come under sharp focus in recent years. The growing debate on the legal, political, and medical implications of hemp products is a clear testimony of this effe...

END_OF_DOCUMENT_TOKEN_TO_BE_REPLACED

Best soil for hemp -- Soil makes a big difference between a bumper plant and a failed harvest. As such, hemp farmers must take the time to test, prepare & manage their soils throughout the growing...

END_OF_DOCUMENT_TOKEN_TO_BE_REPLACED

Improve Therapy with Hemp Flower You may be able to improve therapy with hemp flower. In fact, there are many potential benefits of CBD hemp flower. Now, with the legalization of CBD and the wide r...

END_OF_DOCUMENT_TOKEN_TO_BE_REPLACED

Growing CBD Hemp: Time Is of the Essence

Growing CBD hemp has been on the rise for farmers worldwide. In America, the return on investment for a high-CBD/low-THC hemp crop can be substantial, so it’s no wonder farmers everywhere are wanting ...

END_OF_DOCUMENT_TOKEN_TO_BE_REPLACED

Cannabinoid-Rich Honey Infused by Bees What is cannabinoid-rich honey? As the name implies, it is honey that contains cannabinoids. People have been using honey as both medicine and food for man...